Even 5 to 10 years ago, the prosthetic preparation of the denture funnel, which is the basis of each prosthesis and tightly adheres to the stump, took about 2-3 weeks. During this time, the product was repeatedly tried, corrected, re-tried, corrected again – until the funnel was ideally matched and did not hurt the user. This is a very important process because it depends on whether the use of the prosthesis will be comfortable for the user. Today, thanks to BIOENGINEERING, SMARTTECH 3D scanners, and accurate stump scanning, this process takes up to 3 days and is much more effective. The stump is scanned by a 3D scanner and then, using dedicated software, a prosthetic hopper model is created, which is ideally suited to all recesses and irregularities. 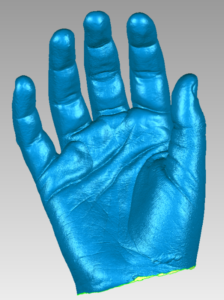 Another interesting project of the BIOENGINEERING company with the use of 3D scanners was the creation of dedicated cosmetic gloves for children with deformation of the upper limbs. The production of a single cosmetic glove is a cost of several thousand zlotych, and in the case of an adult, one copy can last up to several years. The situation is different in the case of children who can reach anywhere with their little hands. Taking the glove to the sandbox can end up even destroying it, which combined with the high cost of production may turn out to be a quite huge expense. That is why the company BIOENGINEERING decided to take a step forward and create a system of printed forms for gloves, which are passed on to parents so that they could produce another copy at a much lower cost. The creation of such forms is a cost equivalent to the production of a single cosmetic glove from scratch. However, the casting of a ready-made form is just a few dozen zlotys, which in turn makes it possible to produce an infinite number of gloves at a much lower cost. It gives children the chance for unlimited play with their peers without the need to constantly remove the glove.