The company UNITIKA from Japan started the research work on the dimensioning of the impact on the edema of the lower limbs. The company deals daily with activities in the field of dimensional inspection and quality control of products and goods of everyday need. They decided to examine the natural swelling of the legs to verify the impact of the compression socks on the body. Originally, using traditional measurement methods, researchers asked volunteers participating in the study to not wear compression socks throughout the day to measure the natural level of leg edema. The test was then repeated on a different day, but with wearing the sock. In both cases, the measurement was performed in the morning and in the evening with water container to calculate the volume based on the filling. 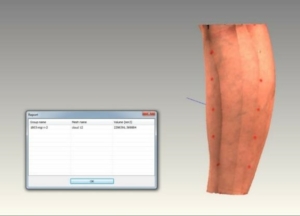 However, it quickly turned out that it is extremely difficult to make calculations in this way because the differences in leg volumes are too small to be dimensioned with traditional methods with a container of water. The UNITIKA company, therefore, decided to use a precise device for the project capable of performing accurate measurements together with the possibility of making a comparison between the influence of individual textile products on the edema at a specific measurement point. So they decided to use the SMARTTECH3D med. Scanner, which is not only accurate but also completely safe for the skin.

The analysis not only made it possible to evaluate the effectiveness of textile products but also provided a lot of additional data. The SMARTTECH3Dmeasure software attached to the optical 3D scanner also made it possible to count the leg circumference diameter while resting for further testing. Also, thanks to the ability to store 3D models, UNITIKA can conduct further tests without re-engaging volunteers, thus reducing costs and time needed.